Last night, it snowed here.  In Houston, Texas.  It happened yet again.  What miracles lie before us?  It began after I went to sleep, and didn’t begin to stick until after I woke up for a bathroom break in the middle of the night.  So, I woke up to snow covering everything that wasn’t concrete this morning.  Which, when you think about it, is kind of the best kind of snow – you don’t have to shovel or worry about tire chains or anything, but you get to have beautiful snow everywhere around you.

The hit of the morning was arriving to school.  My mom drove me in, because we were going to a Christkindlmarkt (German Christmas market) together after school, and the market was too far away for me to drive home first and then go, and it didn’t make sense for us to drive two cars out there.  She was staying for a bit, because we had Mass at school for the Immaculate Conception, and this was a chance for her to see the school a little bit.  Pulling into the parking lot (vacant of teachers, because we were so early), we discovered a sort of snowball fight happening in the picnic table area next to the lot.  We didn’t have much snow on the ground, but the kids were making some snowballs out of it, and throwing them around at one another.  It was adorable.

Naturally, my mom declared that I had to make a snowball, as we were leaving the car.  I grabbed an already-made snowball from the ground, which had lost only a bit after originally falling there, and showed it to her.  As she eyed me up while she finished off her own snowball, I realized that she intended to throw hers at me.

And so the fight began.

My mom and I, shuffling around a parking lot and a small grassy area with snow about it, picking up and throwing odd snowballs at one another, practically screeching with delight.  When I was turned away, a snowball hit her square in the back of the head.  No one was too near us, though, so it had come a long way.  And these were a little tough for regular snowballs, so it definitely hurt her a bit in the moment (stung, perhaps, is the appropriate word here).  It didn’t ruin out fun, of course, but merely added to the silliness of the whole affair – one of my students had attacked my mother with a snowball*.  No part of that declaration makes sense for living here, in Houston, Texas.  😛

In class, before Mass, kids lined up at the windows to stare at the snow in the courtyard below and on the roofs within view.  This was only the second time in their lives that it has snowed here, so their fascination with it was completely understandable, and utterly adorable.

Today had some magic, that’s for sure. 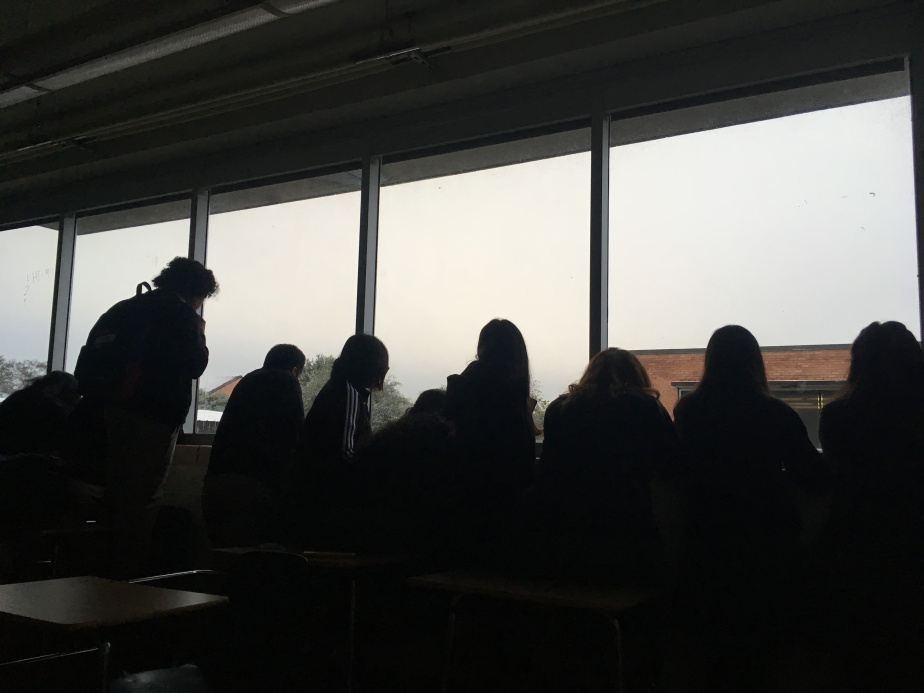 *I found out later that the student who hit my mom actually was a student of mine.  He asked me ‘who that teacher was, walking with me earlier,’ and, when I asked for clarification, he described the morning snowball affair.  “That was my mom.”  In shock, he declared that he thought it was a teacher and asked me to tell my mom that he was sorry for what he did to her.  (My mom and I laughed at the thought that he apologized for having hit my mom, but that is seems to be the case that he willingly would hit a teacher in the head with a hard snowball, without question.)

P.S.  My task today was to “[d]raw a Christmas card”.  So, I drew one on the roof of my mom’s car tonight as we were leaving the Christkindlmarkt.  Frost had begun to reappear all over the place.