I have mehndi on my hands.  I really love it.  I kind of want to use henna all the time, but I’m just really no good so far at doing traditional or cultural designs tied to mehndi.  Perhaps it really is worth practicing on paper, like the Indian lady told me to do… I’m really considering trying it out in the very near future.

Tonight, I really just want to share this photo of something I stumbled upon this afternoon, as we walked through the horse area by the ranch rodeo events that are happening today and tomorrow. 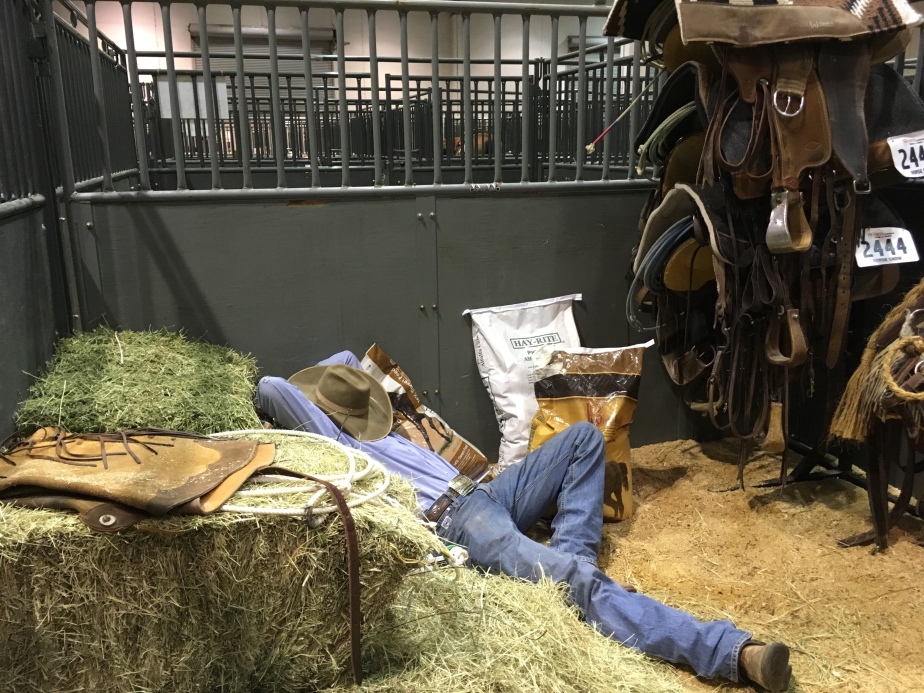 This was in a stall of its own, right between two stalls with horses in them. 🙂

I started ukulele lessons today.  It also included a reunion and a brief lesson on Hawaiian, the language, which were both a fabulous bonus.

I’ve always had a sort of passive affinity for Hawaiian culture – that wonderful island life, about which I knew almost nothing.  I was almost afraid to go to Hawaiʻi, for fear of finding that the wonderful world I’d imagined was no longer in existence.  After living in Japan, even being in the countryside, I have learned the sort of balance that likely exists in the culture today.  It is like cowboys in Texas.  We have our big buildings and fancy cars and billboards, but you can still find, here and there, the true tradition.  Sometimes, it is only seen in ceremonies.  And sometimes it is part of someone’s everyday life.

My brother, though he rides and owns no horses, spends his days working on his land.  Physical labor in jeans and surrounded by grass, trees, and animals is his life most days.  And he grew up in the city.  There are plenty of others who grew up living his kind of life, and who still do the ranching on horseback.  Inside our city limits, no one would guess that that kind of life is just beyond our little area.  The average person wouldn’t even cross it knowingly, if he went driving outside the city, either.  You have to know how to find it.  And that’s just how Japan was… When I think of Hawaiʻi now, that’s how I imagine it must be to a certain degree.

Anyway, ukulele is fun.  I started it back in Japan, because I was lonely and didn’t have music in my life.  Plus, Hawaiian culture seemed to be prominent in Japan (the reasons for which I hadn’t understood at first), so ukulele seemed an appropriate way to bring music into my life while in Japan.  I even took a few hula lessons.  (Yes, they were awesome.)

Actually, what really spawned my desire to learn hula and ukulele – not just the casual interest with which I first bought the ukulele, but the real desire that got me into lessons for hula and then, finally, for ukulele now – was a film.  It was based in Hawaiʻi, and the caucasian daughter, maybe about 14 years old (I forget), did hula.  The way she moved her arms in the dance had me gazing, melting, it was just so beautiful to me.  Watching her dance, I had something happen within me.  I guess, because she was not Japanese or Hawaiian, but like me went through me head… I was able to see hula differently.  It was, at last, something that it was acceptable for me to do.

I had seen Japanese friends perform wonderfully, and plenty of other Japanese women I don’t even know, too.  But their close ties to Hawaiʻi made it okay for them to do it.  It was regular and standard for them to be doing hula.  But what – it isn’t “right”, but something like that, “reason” perhaps – reason does a German-heritage girl from Texas have for doing hula, without an extreme, intense love for it?

Maybe this is just my own brain that had me stuck in this thought process, but it just didn’t make enough sense to me to feel comfortable with pursuing hula.  It felt to me like visiting a religious building for a region to which one does not belong and about which one knows very little.  It isn’t that the person is not allowed.  Not at all.  It is just that the person can feel a little lost and uncertain when visiting, and so it can be difficult to visit in the first place, without having a sort of invitation.  That’s kind of how I felt about hula.

And that movie helped alter that for me.  I started attending hula classes whenever I could, and began somewhat seeking out a ukulele teacher.

Eventually, nude in a hot spring bath in the mountains, I found one.  And now, almost a year later, we finally are in the same country and with the same currency (that was the issue before), so we can do lessons.  We aren’t anywhere near one another, of course, because I’m in Texas and she’s in Hawaiʻi, but it’s going well so far.  Playing together is a bit weird, because of the lag, but I’ve worked with it for years with other things, so I’m somewhat accustomed to being slightly ahead of the beat and to hearing the clash of notes and timing, so that it sounds good on the other side.  All-in-all, it was fun, and I look forward to the next lesson next week.  😀

So, go listen to a ukulele song today, and think of me, yeah?  😉

P.S.  Icicles were crashing outside my window during our lesson today.  And this is Houston.  How cool is that?!  Or warming, I guess…

Because everyone could use a bit of this book in your life ;P
From rising ‘til bed, places of peace for me
Night lights <3 (and Gundam) ;)
Feetsies! Manhole covers and Ginko leaves always make me smile
Day and Night
Casually cool yet dorky
Dork out, work out; dork out, eat out; then dork out some more 😂
Fangirling 😂
These are a few of my favorite (Japan) things
Final touches on a Tokyo birthday: Riding in almost-last-train comically packed cars, purikura, Taiko no Tatsujin (awesome drumming game at the game centers!), and karaoke (done the right way - thank you, Japan) Bonus points if you can tell the song beFore you see the words on the screen(!!!)
Teaching my brother about Japanese photo-taking fun 😂
We both superbly enjoyed the birthday present, because we both happen to be workout dorks, and @shingomoromasa is kind of the bomb.com... Today’s Workout: As Many Rounds As Possible in 5 minutes of 3 burpee-backflips, 10 overhead squats, and 30 double unders 3-minute rest (with interview questions to answer about the workout) AMRAP for 5 minutes of 3 free handstand push-ups, 10 box jumps, and 10 dumbbell snatches 🤔 @covenantgym , when are we upgrading to these burpees? 🤷🏻‍♂️ #crossfit #reebok #amrap #beast