Man who appears magically next to us: My girlfriend and I saw how you were dressed, and we were just at this party, and they gave us these cookies, and we wanted you…

He trails off, proffering a small, white papered bundle. 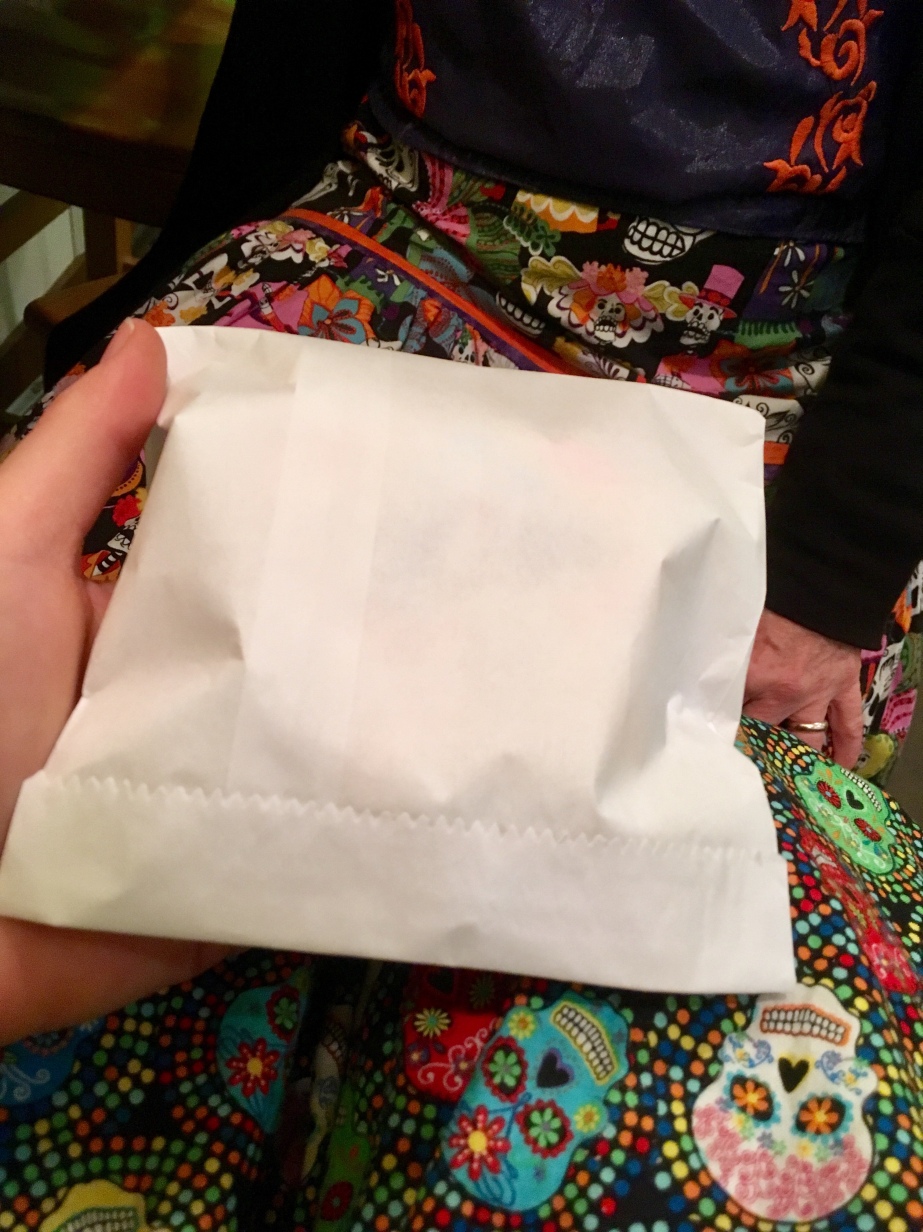 Hannah: [Big and quick inhale] Are they calaveras?!? Are they skull cookies??

Man, smiling: Yeah, yeah they are.

Hannah & Mom, slightly off from one another: Awww, thank you(!).

I accepted the package graciously and peeked inside at them, expressed another but of bouncy joy and expressed my gratitude again, both to him and for him to tell his girlfriend, and the man walked off, all three of us smiling.

Not so bad for dinner at a Thai place – my mom had wanted Mexican food to end the holiday, but everywhere food was, naturally, packed…, so, we just stopped for a warm meal at the place down the street from my house, on our way to take me home.

When we fully opened the package and took them out, we found handmade, adorable calavera cookies. 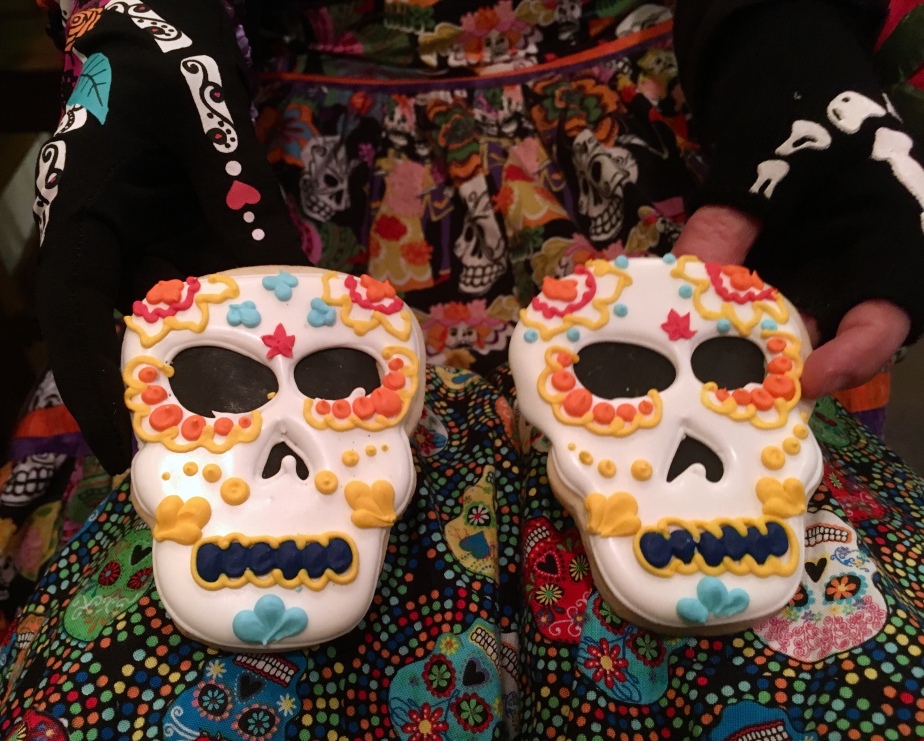 So, in a way, my mom got her Mexican food to celebrate the end of the Día de Muertos days, after all. 😛

On my evening walk today, I was struck by what I believe must have been the smell of someone’s dryer sheets.  Each time I passed it, I was brought instantly back to swim team days.  Actually, I was brought back to specific swim team evenings.  Somehow, the smell, combined with the warm air and the setting sun, reminded me of Monday night swim meets, and, more specifically, the movie nights to follow (once I was a little older).

Those movie nights are probably some of the best evenings I’ve known.  We always had dinner at this one local restaurant after every meet (I think they gave use free kids meals with our team suits on).  And then, afterward, the older kids would go over to someone’s house and watch a movie together.  Eventually, I was approved to attend movie nights, though not many my age ever went.  I just had an older brother, so I had an early in, so to speak.

At the movie nights, I had not a care in the world – swimming was behind me, and I got to hang around with my brother and other cool people.  (Hey, they were all cool in my mind, because they were older and better at swimming, and because my brother liked them, and he was totally cool.)  It was often at this one family’s house where the mother always made cookies.  I’m not sure how it happened – though it in no way surprises me – but I ended up being her helper of sorts.

We kind of only watched “Hook”, with the occasional stray to “Star Wars”, at the movie nights, even though they happened every week.  But no one seemed to mind that we watched the same thing over and over again.  (“Hook” really is a spectacular film, you know.)  Since I pretty much could quote the whole movie, I didn’t mind checking out the cookie-baking setup off in the kitchen one night.  I ended up actually making and then serving the cookies during the movie from then on out.  I went in and out of the movie, only hanging in the kitchen when I had a specific task to undertake, so I still saw most of the movie.  But I got to do something extra, fun, special, and useful, too.  Plus, everyone loved me for bringing them warm cookies that the mom and I had made.  And, what made it even more special, was that I was hanging out with my older brother and his friends – I qualified to be with them, and they weren’t opposed to my being there.  🙂

One movie night in particular, as we left the house, I felt like I was in a wonderland, because flowing white surrounded us in the warm wind – someone had wrapped the house during our movie.  Sure, it was toilet paper hanging everywhere from the trees in the front yard, but it felt like magic.  There was something about those movie nights that just made life seem easy, free, and happy.  I think that’s part of why I still love “Hook” and “Star Wars” so much, and I regularly have a desire to watch them (and always feel really special whenever I do actually watch them).

Yeah, those were really good times.  Thanks, whomever, for your dryer sheets this evening.  🙂

My mom came home late tonight, and walked into my room with a surprise for me.  Bop It Extreme (R) with newly replaced batteries.  I asked if she was teasing me, because it was actually just going to make some absurd sound after sitting for over a decade, but she declared that she had found it today and had put in new batteries specifically because she recalled that I had liked the game.

I showed her how I always held it, told her about the sounds for scoring, and convinced her to play the group version with me, passing it back and forth together.  We were both laughing like little kids.  It was fabulous.

Afterward, we began discussing family activities for our family open house the Saturday before Christmas, while we have family all in town.  The main topic of this discussion was cooked decorating.  As my mom listed off the number of dog houses, campers, trains, houses, sweaters, and ninjas she had, we couldn’t contain our growing smiles.  She ended with, “and a partridge in a pear tree,” and we both laughed while she figured out what she actually had not yet listed (there is no partridge and no pear tree).  I said that it sounded more like a “The dog, in the camper, with the nunchucks,” kind of scenario.  She argued that the dog goes in the doghouse, though, but then declared that that is why the dog is in the doghouse – because he was the one in the camper with the nunchucks…

Because everyone could use a bit of this book in your life ;P
From rising ‘til bed, places of peace for me
Night lights <3 (and Gundam) ;)
Feetsies! Manhole covers and Ginko leaves always make me smile
Day and Night
Casually cool yet dorky
Dork out, work out; dork out, eat out; then dork out some more 😂
Fangirling 😂
These are a few of my favorite (Japan) things
Final touches on a Tokyo birthday: Riding in almost-last-train comically packed cars, purikura, Taiko no Tatsujin (awesome drumming game at the game centers!), and karaoke (done the right way - thank you, Japan) Bonus points if you can tell the song beFore you see the words on the screen(!!!)
Teaching my brother about Japanese photo-taking fun 😂
We both superbly enjoyed the birthday present, because we both happen to be workout dorks, and @shingomoromasa is kind of the bomb.com... Today’s Workout: As Many Rounds As Possible in 5 minutes of 3 burpee-backflips, 10 overhead squats, and 30 double unders 3-minute rest (with interview questions to answer about the workout) AMRAP for 5 minutes of 3 free handstand push-ups, 10 box jumps, and 10 dumbbell snatches 🤔 @covenantgym , when are we upgrading to these burpees? 🤷🏻‍♂️ #crossfit #reebok #amrap #beast