Last night, I even slept quite blissfully – I didn’t wake up until well after seven this morning… not even to use the bathroom.

That’s kind of a big deal.

Anyway, so why was I so blissful and confident last night, going to bed?

Well, because of our lovely time at RenFest yesterday.

I told my mom a few months back that I wanted finally to take advantage of my age, and to wear an outfit for RenFest that showed a little (meaning a lot) more skin than I had always been accustomed to showing.

In essence, I wanted to share the beauty of my body with the world, I told her.

And so we strategized a bit, and planned out an outfit for me.

And then, due to her lack of making time for it, our plan changed entirely, I ended up buying some leather skins from a leather place – she did help me find them and pick them out – and then I made the outfit myself.

However, I very clearly told her that she needed to handle the cloak part, and so, very begrudgingly at first, she did.

And the outfit turned out great.

I even messed up entirely by using the top piece for the skirt, and so had to recreate the top out of a totally different piece of leather than originally intended (and planned out).

But, when I saw myself at RenFest, in one of their glorious massive bathroom mirrors, I discovered that I actually looked really cool.

I wanted people to see me and to think, “…Wow…”

As for myself, anyway, that’s exactly how I felt, seeing myself in the mirror in my outfit.

And so I smiled a lot, and was proud of myself for being comfortable in such an outfit, and delighted by my confidence.

Also, I took pictures with people and was in photos for people…, and was happy about it.

I overheard one girl saying quietly but fervently to her boyfriend, “I want that outfit,” indicating subtly me.

At one point, one of the workers thought I was a worker/actor, my outfit was so well done and worn… and that is cool (to me, anyway).

So, that was one part of the day. 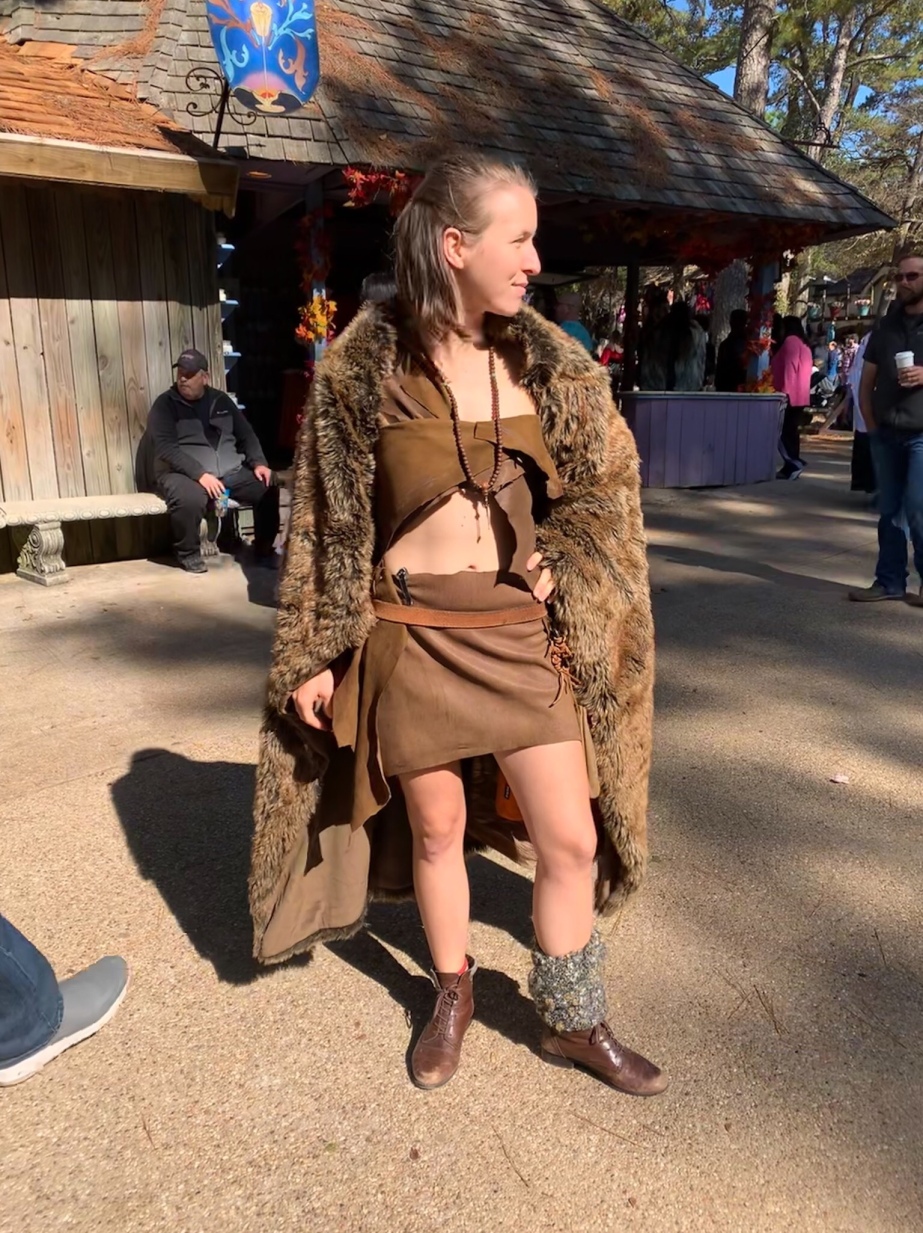 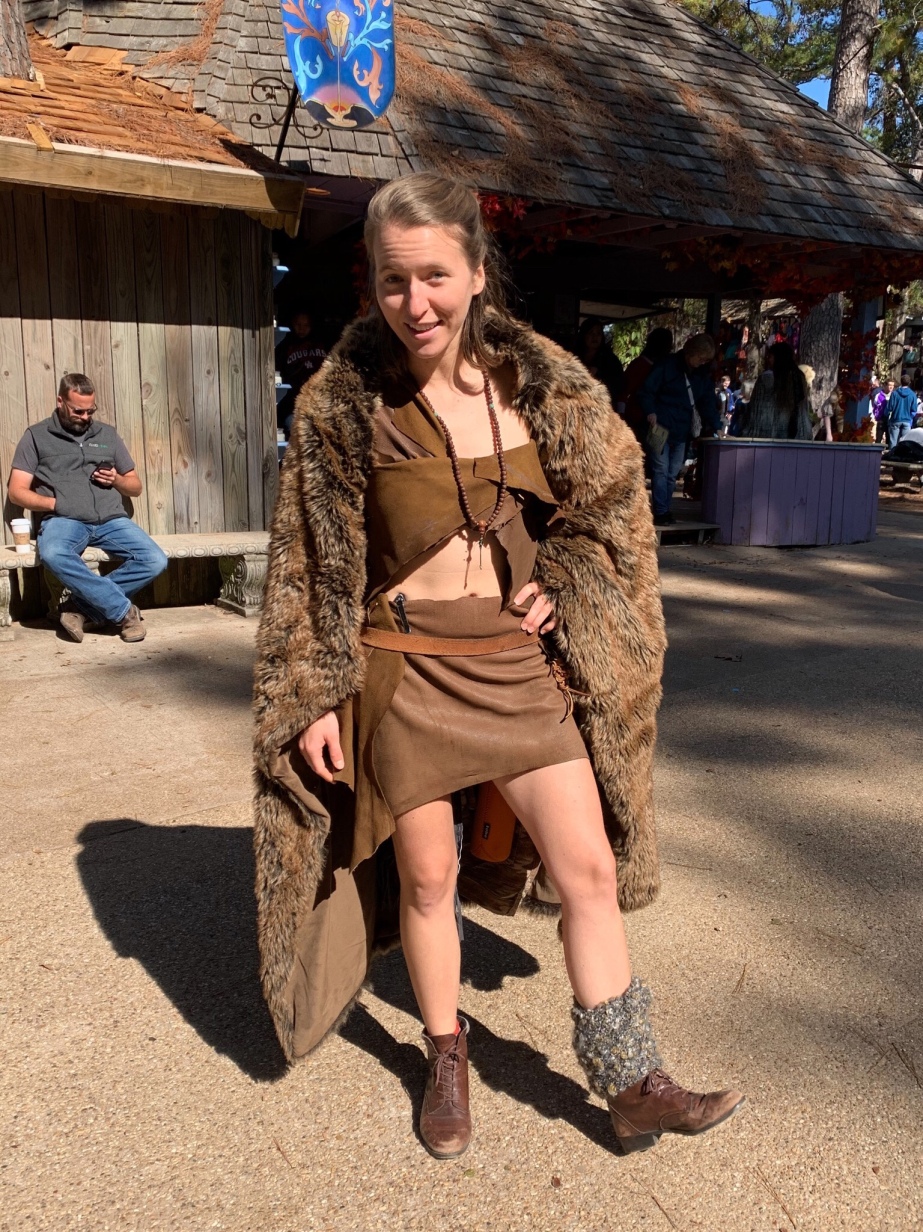 The second of the three main parts of my blissful confidence is connected to my outfit, though a different approach to the outfit: It is my gratitude for and acknowledgement of how far I have improved and developed mentally, emotionally, and even psychologically regarding my body in the past year.

When I had that conversation with my best friend just over a year ago, the one in which I let go (finally) the rest of what had been holding me back regarding some rough and tough and rather terrible past events in my life, I knew that, at long last, things were going to transform for me in terms of my relationship with my body, and my body’s relationship with the world.

Yesterday, I saw – actually, it was mostly last night, when I was reflecting on the day that I noticed the whole of it, including the part where I had been so comfortable during the day, I had hardly noticed that this was a new and formerly-terrifying-and-impossible scenario for me – how huge this was, how these two relationships had truly transformed over this past year.

And it brings me practically to tears every time I become present to that fact again… I finally am getting to be the woman I have wanted to be, body, confidence, love, and all.

(Okay, so I don’t have the partner yet, but I am being the person I want to be, even without him, and that’s a darn good start!) 😉

Now, the third thing is something that branches off of the first two: because of my transformation and because of my awesome outfit, I was ready and able to admit my goal and to embrace it when it presented itself to me.

I have always wanted a kiss card, ever since I first learned of them at RenFest.

It is a simple paper business-card-like card that reads, “One free kids from any willing man, woman, or beast”.

I have remembered that ever since I first read one of the cards.

Yesterday, near the morning, I admitted to myself, “I really would like to get one of those cards today,” meaning the kiss card, of course.

And I left it in the air around me, and offered the World to present an opportunity to me, if it saw fit to do so.

I then forgot about the kiss card for the majority of the day.

That is until, just after sunset, my mom and I were heading up one row on the far side of the property, aiming to check out that set of shops before heading home.

Just as my mom is beginning to turn her gait to a shop we were already passing but that had suddenly caught her eye, I heard up ahead, someone coming towards us, announcing rather loudly, “Free kiss to any willing man, woman, or beast!”

With almost no hesitation whatsoever, I told my mom that I’d be right back, and I headed toward the voice of this yet to be seen individual.

As he came finally into view – remember that it is dark, since the sun has set, and so only a few feet ahead are visible at any time, thanks to the lights coming from the insides of shops – I asked, “Are you offering or asking?”

(Meaning, is he offering a card for someone simply to take, or is he wanting to cash in his card and receive a kiss?)

We both came to a halt, facing one another.

“Either,” he says, after a few moments of consideration.

A man across the way announces to the guy and me that he thinks they have a taker (of the kiss offer, that is).

We turn back to one another.

“Either way, I accept,” I say, nervous with excitement, but calm and at ease as a whole, smiling calmly.

“Okay…, So?” he says in response, and raises his eyebrows and lifts his hands to the side, asking clearly which one I would like to select – he is allowing me to choose if I simply want the card, or if I want to accept the request of a kiss, and we both know this.

“The kiss, then,” I say, after full consideration and acknowledgment of the fact that this is what I genuinely want – to kiss this stranger.

He smiles, “On the cheek or on the lips,” he half says half questions.

Momentary pause… I shrug to my left shoulder, “Lips is good… on the lips,” I declare.

“Okay,” and he steps toward me, as I step toward him.

He is taller than I.

He also is younger than I.

But neither is a concern – just something I have noticed.

He leans down slightly and places his right hand behind my head – an unexpected gesture of intimacy – and we kiss.

As I felt the pressure of his lips and teeth against my own, I felt the same sort of feeling of positivity running through my body as I feel with hugs – I wondered in that moment if the brain reacted similarly to this lip pressure as it does to our chest pressure from hugs… happy hormones releasing and spreading in the body, taking care of the body in their own unique way.

As we comfortably step away again from one another, he hands me the card in ‘payment’, I thank him, and we both smile, before heading on our ways. 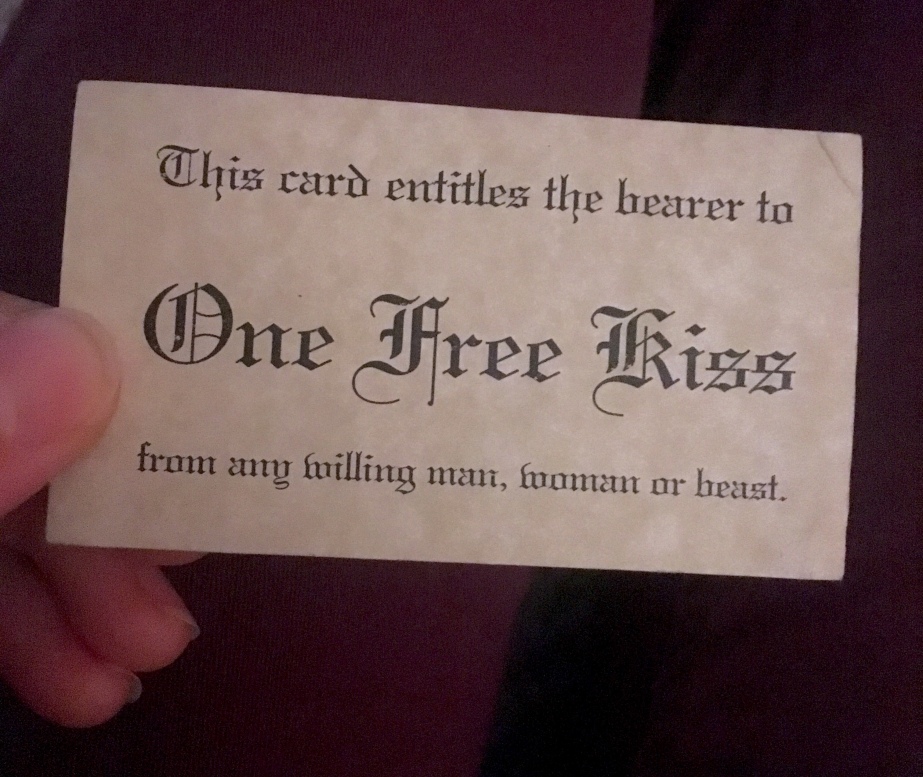 I find my mom in the shop that had grabbed her attention – an amazing shop with handmade instruments of many sorts, and feel my delight increasing…

That kiss was exactly what I had wanted… this was yet another of my life dreams-turned-goals come true.

It was only a dream at first – I longed to be a woman who would kiss a stranger like this, in a friendly and fun way…, but I didn’t really expect I ever could be that kind of person.

Yet, as I have developed over this past year, I have grown to be so comfortable with my body and my womanhood that I not only could accept such an offer, but that I was willing and able to seek it out.

Sure, he was offering the kiss, but I was the one who went out of my way to go ask him about it and accept it and embrace it.

And I could have just taken the card for myself, with no kiss – he allowed the option for me.

And I could have accepted giving a kiss on the cheek, if I’d wanted to be fair for the card, while still keeping myself safe (I think that’s what the concern had been in the past: safety in preservation and avoidance).

But I looked at it fully, honestly, and openly, and I saw very clearly that I wanted to kiss this stranger, and that I wanted to have the card for having earned it, not for having played one of the games and been given the card as my consolation prize (which is how people typically obtain them in the first place).

I wanted both parts of that, and the former much more than the latter.

So, with mutual agreement and desire determined clearly, I kissed him.

And I am incredibly grateful to myself for having not only been able to do it, but also for having done it.

And many people probably would have had no issue with such a situation, but it was big for me, because I was never one for such things – I don’t kiss people who aren’t family almost ever… I have only had one boyfriend, and only a small handful of non-family people I’ve kissed… it just hasn’t been a thing in my life.

I love physical contact, I love holding hands (even with friends and little kids, not necessarily with a boyfriend), and I love hugs…, but always and only from people I love and trust.

Otherwise, it has kind of turned out that I need to be not touched at all by the rest of the world (a fact of which I was not entirely conscious until my aunt commented on it a few years back, “As long as nobody touches you, you’re fine,” at which point I began to give much consideration to the matter.).

So, for someone to be allowed to touch me is kind of a big deal.

And for me to be willing to allow someone to kiss me is even bigger.

Even if it is just a single kiss on the lips.

Going to bed last night, this third point was what mostly was on my mind.

However, it was in gratitude and in celebration that I considered it, knowing how my development this past year was what allowed me to grab such an opportunity, as well as for me to be open to and even desiring such an opportunity.