Tonight, I offer a prayer:

I pray for these bookings to be resolved with beauty and with ease, and as soon as is possible.

I pray that I listen to what the World is sharing with me, hear the light of God, and act according to His will and what is best for the World.

I pray that we have an amazing time, that I be of service to my friends and to my brothers, and that we all be happy, holy, healthy throughout our trips, and afterward for many, many years to come.

I pray for the healing of my family members who are currently in pain, that they be healed and become happy, healthy, holy.

With love and gratitude, I offer these prayers*.

*Yes, I know they turned plural on us. 😉

I asked him why he took the photo, and he replied honestly,

The oven looked awesome and so did I hahaha 🤷🏻‍♂️🤦🏻‍♂️

He, of course, corrected “oven” to “ocean”, but I knew what he meant.

He was not being conceited, nor was he being rude or nasty or macho or anything else negative… he was sharing truly with me, openly and honestly.

It was a gorgeous photo of a gorgeous swimsuit-donned, tanned, and tattooed man on a spectacular scene of two-toned blue ocean water and a blue sky of yet another blue, and the man was smiling with practically no eyes, so large and true was his grin.

To come across as sexual, even sexy, at times, has been ingrained in my mind to equate wrongness, shame, something terrible for myself and the world.

I have only recently begun to appreciate such images of others, and am working on valuing such an image of myself – in accepting it as appropriate as part of my human expression in this life.

My next step in that process, I feel, is being comfortable with a photo like the one I had discussed with this guy tonight.

As he mentioned in our conversation, the intention behind the photo was to show something beautiful – his father had declared the scene and the son as gorgeous, and so photographed what stood before him (as I gladly would have done)… he was not trying to catch anyone’s eye, or get anything out of it – he was just sharing the wonderful memory and scene with the world (for which I and everyone else I know who has seen the photo have been grateful).

P.S. Our whole conversation began out of a conversation my friend and I had, regarding our shared experiences of body image (though from different backgrounds and for different reasons), after she posted this, which included a somewhat sultry photo of her posing on the beach. 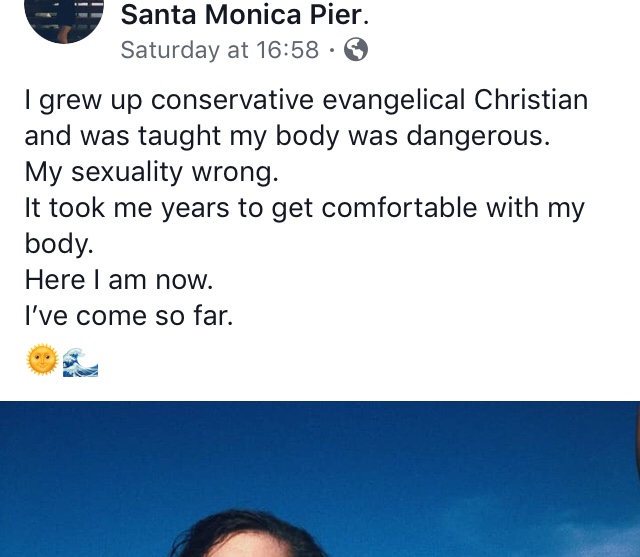 She is still Christian, and more beautiful than ever in her confidence…, and I regularly use her as inspiration in my own life, to help me to challenge my own fears and struggles in life that I have yet to transform.

Can I just say that it sometimes feels totally unfair that certain boys end up having the bodies of men (and girls, the bodies of women) when they are still in the slightly awkward phase of semi-idiocy that is high school?

There they are, prime adult physique, the epitome of evolution doing its darndest to make sure the species continues onward in the world, surrounded by various stages of true boyhood and immaturity, that being physical, psychological, and mental immaturity….. and yet, they look to all onlookers to be men…., ready to stand for a modern Michelangelo or Botticelli…

And, usually, they have no idea the effect they can have on other people.

Sure, some, unfortunately, are harassed by the worst of breeding, and therefore have a sense of something being askew… but, for the most part, they tend only to think of themselves as doing well, as being blessed with good genes and a good bodily development.

They also, somehow, serve as not so much a reminder, but as a calling out of the fact that so many men these days are not maintaining and hosting such healthy bodies as these man-boys (and the same with women and the woman-girls)… the prime of the physical body is arriving so soon, and lost before they are even fully developed in the brain, it sometimes feels… (for the average, anyway)…

In a way, it is a blessing.

And, in a way, it kind of totally sucks to have to be around…

Anyway…, just some thoughts for tonight.

I entitled this “Fitness”, but the phone decided to change it to “Fatness”, when I went to click on the writing section, and the phone offered/suggested alternatives to what I’d written… it still somewhat applies, so I’m leaving it… it’s like a Freudian slip for the technology age. 😂

So, after class today, I was talking with one of the coaches about when I might expect to see visual results with my body from these workouts.

We talked briefly about my diet, and then he requested to speak honestly.

It’s been a month of these classes, and I’ve attended 23 of them so far.

I checked my activity log for running, walking, and biking – and I only log my bike ride to and from the workouts, as well as any runs of a mile or more in the workout, not the actual workouts themselves – and I already have almost half the number of activities and half the distance covered that I had in all of last year… and I’ve gotten almost all of that this past month.

I had one activity, a 3-mile hike/run through the hills in Redlands, California, when I went with a friend who was moving there, logged this year otherwise… nothing else.

So, in one month, I’m already almost halfway to all of my official exercise activities last year.

I mean, totally bummer that I had so few last year, but we can’t change that, nor can we change the mental struggle that kind of ran the show regarding all of that…, we can, however, embrace the freedom that is the new state of affairs, where I am now governing my fitness and my fitness activities (not some mental freak-out), and I am actively pursuing genuine and somewhat intense physical fitness.

And, though I’ve felt that my progress visually is slow – aka my belly and haunches and inner thighs still seem so ugh – it is nice to have the positive encouragement from the coach today, as well as my sneaky shoulder muscle for when I brush my teeth. 🙂

Yay, for mental and physical fitness! 🙂

I don’t even do CrossFit, but I watched the end of the 2018 CrossFit Games today, because my brother was super excited about it, and he attended it all weekend in Madison, Wisconsin.  Not even four minutes into it, I was balling.  And, from that point onward, I continued having bouts of extreme tears all over the place until the very end of the Games.  It’s just that kind of thing.  I’ve done and been part of plenty of sports to be able to relate to so many of the feelings and situations and emotions, that I felt as though I could feel their struggles and successes.  Add the comments about how the whole goal of doing CrossFit is to be better as a person than one was yesterday, and it’s just a total tear fest.

I’m still not sure that I want to do CrossFit myself, but it was really neat to watch the nonsense that was the final round of the 2018 CrossFit Games.

Water, Shelters, Wild-life, and Chariot-lined Skies #WWWW #W4 #WildWildWestieWinter
This one is a little old, but it makes my heart happy - I was silly and I was lazy, it was almost 1am on one of the rare occasions that I went out dancing last year, but I was out dancing, I was being true to myself, and I was having a wonderful time✨💗💫🤗🙏 “Don’t Wait” by Mapei
Because everyone could use a bit of this book in your life ;P
From rising ‘til bed, places of peace for me
Night lights <3 (and Gundam) ;)
Feetsies! Manhole covers and Ginko leaves always make me smile
Day and Night
Casually cool yet dorky
Dork out, work out; dork out, eat out; then dork out some more 😂
Fangirling 😂
These are a few of my favorite (Japan) things
Final touches on a Tokyo birthday: Riding in almost-last-train comically packed cars, purikura, Taiko no Tatsujin (awesome drumming game at the game centers!), and karaoke (done the right way - thank you, Japan) Bonus points if you can tell the song beFore you see the words on the screen(!!!)